V.O. - When you see red (single, from the album On rapids, Humpty Dumpty Records) 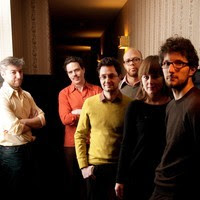 V.O. are a well-established six-piece from Brussels (although new to me), centred around the elegantly moustached Boris Gronemberger. On their third album they've hooked up with John McEntire of Tortoise on production and the results are stunning.

More on the album anon, but for now sample this intoxicating first single. It might make you think of Stereolab a little in the vintage synth lines, maybe Tortoise in some cultured jazz inflections.

The glorious male-female harmonies (the latter by Aurelie Muller, ex Soy Un Caballo) around simple keyboard repetitions might even make you think of a folkier Beach Boys, but there's something brilliantly progressive in the restless, shifting bass melody and massively uplifting in those serene brass swells that makes this sound all their own.

It also seems to be a protest song, a call to arms which of course is stirring enough in itself, but apart from that, as I said earlier, it's irresistible and bar-raising pop music.