TEEN – Better (from the album In limbo, Carpark Records) 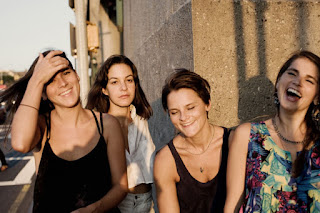 I have a bit of catching up to do around here so let's start with this belated mention.

TEEN are four women out of Brooklyn, three sisters and a friend, who make thrilling psych pop with attitude. (Teeny Lieberson, one of the sisters who gives the band its name, used to be in Here We Go Magic.)

Their album In limbo came out last autumn on Carpark Records, mixed and produced with the great Sonic Boom. I don’t want to bore you all with boo-hoo promo-submission stories, but this one languished in the digital pile until now.

Anyway, the lightning is finally out of the bottle.

Start with 'Better', a Velvets-style piano motif laid over gurgling bass synths and tribal drums that just keeps on going. It really is the shit.

You will believe them.

Check ‘Electric’ as well, a brilliantly garage-y bassline-with-plain-as-pie-snarebeat, that rises to a stunning crescendo with multiple vocals and an unexpected New Wave feel.

You might say it was art rock if it wasn’t so dirty.

*Since that great revelation hit me, the band have actually announced another release, the new single 'Paradise', due out in July. Here's a bit of bumpf.

While In Limbo's songs have many layers and effects, ‘Paradise’ is a more natural affair, with the band only playing what they could physically perform in a live setting. Teeny sings in a higher register here, inspired by Kate Bush and Al Green. “Our music in the past was so about interweaving melodies, creating movement by syncopation, and simple chord structures,” she says. “It felt like the next step forward would be to take a more simplistic, live approach, play lines in unison and create a different kind of conversation between the instruments.”

It's a different feel alright, away from the garage/kraut end of psych pop in the direction of sunshine pop or the Paisley Underground a little bit (maybe because of that organ and chorused guitars). Anyhow, I like it too.