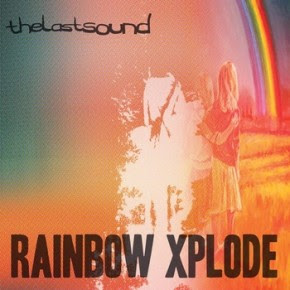 And finally in this Irish round-up, The Last Sound. Actually this is a band you'll find in these pages before. It's one man, Barry Murphy, for the most part and his single of a couple of years ago 'Only the lonely know the glow is failing' was on constant play around here. The album is a brilliant fusion of pop tunes and dirty industrial noise. Doesn't sound promising? You need to hear it. Again, this review from the pages of WeAreNoise.

The 5th studio album from Dubliner Barry Murphy, with Bryan O’Connell on drums, could be the perfect Irish summer record – shards of sun through dirty black clouds.

The most impressive feature of the album for me is its capacity to carry genuine and lasting pop hooks on board waves of filthy background hum and industrial noise. Melodies, synth chugs and hummable bass parts literally trip over themselves in a race to the pop funny bone but are ultimately brought back down to earth by a certain musical (if I may reclaim the word) austerity.

‘Three rock’, for example, has the sweetest chorus shift after an ominous beginning, one of a few moments on the album that tend to remind you a bit of the bleepy, mildly deranged uplands of Grimes (quick ad buyers, get on this for your Telecommunications client).

Similarly, parts of ‘Brighter’ threaten to head off into a machine sunset before dragging themselves back in sight of another beautiful filtered synth break.

Gradually, elements of English 80s New Wave creep through, I’m thinking of the likes of Gary Numan and Japan a little; for example in the gigantic pulsing synths of ’Nth Xploder’ (incidentally an underground dancefloor classic in waiting), the stabbing backbeat of ‘Into something’ and that irresistible circling pattern of ‘Three rock’.

Of course, it would be hard to better the absolute perfection of previous single ‘Only the lonely know the glow is failing’, a pop song that gleams and glints with foreboding while being airily uplifting. In a way, that quality would remind you of shoegaze - a kind of glittering darkness with a tunnelling energy - which of course this album updates superbly. I must say that song still remains the highpoint of the album for me (2 years after its initial release), looking down somewhat on its surroundings. But even the highest peak must be supported by the slopes around it and what the album does is give it an invigorating context, showing it off to even greater effect if anything.

In short, Rainbow Xplode is a fierce pop record, cohesive and forward-thinking. And (like album track ‘Motorik pain’) it has a tremendous Krautrock resilience and stoicism about it.