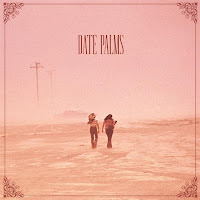 This album has the great feel of the desert off it, parched and shimmering. There’s also something ageless about it, a spanning of boundaries which feels really nourishing. Cosmic is about right. Every Thrill Jockey release is worthy of attention, this one perhaps more for those late night slumbering/narcotic times of life.

Here’s some bio on the band –

Date Palms revolves around the core duo of Gregg Kowalsky (keyboards, electronics) and Marielle Jakobsons (violin, flute, electronics). They employ traditional rock instrumentation to create music informed by Indian classical music, country, minimalism, and spiritual jazz, arriving at a style that is wholly their own. On their third album, The Dusted Sessions, the duo expanded the line-up to include Ben Bracken on electric bass, Michael Elrod on tanpura, and Noah Philips on electric guitar (a first for the band). Kowalsky and Jakobsons are both accomplished solo musicians in their own right: Kowalsky has released ambient albums on Kranky as well as a collaborative release with Josef Van Wissem on Amish, and Jakobsons has released music on the Digitalis and Students of Decay labels. Date Palms uses the sound and imagery of the dustbowl and the American West to express something truly cosmic and unique within the already highly individualistic Bay Area underground.

Date Palms - Dusted Down from Thrill Jockey Records on Vimeo.