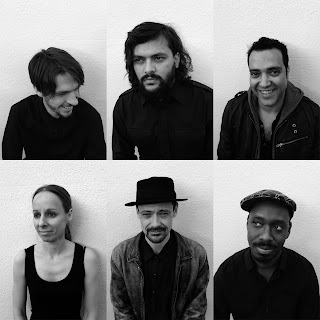 One of my favourite songs of last year was a thrillingly groovy piece of...well you might call it world music although there’s plenty more than just that involved, lead by a twin saxophone attack with furious percussion and a vaguely unhinged shrieking vocal. The band was Melt Yourself Down - a group featuring some well known names from other bands including Acoustic Ladyland, Zun Zun Egui and Rokia Traore – and their self-titled album came out in June on the ever wonderful Leaf label.

The album takes the lead track’s dance music origins and raises them brilliantly via some reverb-drenched electronics, pounding backbeats and a series of memorable choruses, of which the first single is one of the best.

**Watch out for the strobes in this video.**

I love their press releases too, full of some kind of magic realism with playful word games which I reckon are only half joking. In fact, they are well worth reading through and taking at face value. Their first introduction had a time-travel, epic novel feel to it.

Melt Yourself Down is the sound of Cairo '57, Cologne '72, New York '78, London 2013. A riot of colour and noise, they rip the still beating heart from the remains of Acoustic Ladyland…reanimated with intense, sweaty funk, uplifting horns and blistering Nubian drums…

So techno, punk funk, no wave even, bits of these are all in here. This was the line for a later single.

‘Release!’ is Melt Yourself Down’s latest incantation: a tale of emancipation, liberation. A red dirt desert stomp and a downtown block party, in 500 pieces.

Melt Yourself Down - Release! - Official Video from Morgan on Vimeo.

LIberation, emancipation are two very apt words for the music in general. You get the feeling there’s no musical snobbery at work here, no highbrow/lowbrow split, that inspiration could be drawn from any part of the culture at large, musical or otherwise. Some of the constituent parts of ‘Release’ could very easily find a home on a techno 12”. ‘Tuna’ has a breakdown section like something off a rare ska track, all brass and bristling backbeat. Boundaries are wide open here (Mr Cameron).

Here’s another beautiful description for the upcoming new single.

‘Camel’ is the wall of heat that greets you when the plane doors open in a tropical land. It is rubber tyres eating up hot sweet tarmac until the road ends and the desert begins. ‘Camel’ is a chameleon slinking across the Saharan sand, a mirage of sound, the flap of a darkened tent as the smiling blind man welcomes you in...

There’s something in that too. It is hot music, sweaty, it’s born from a climate other than ours (Ireland I mean). It’s also obviously made for the dancefloor (the punk funk trademark cowbells and slinky bass riff on ‘Kingdom of Kush’ are all the confirmation you need) and should probably be heard in a live setting first.

It’s clear too that this crowd have a distinctly deadpan sense of humour (I mean, the band name alone?) as well as a great line in pop tunes. Which the world needs more of. The world also needs more of this kind of incendiary live performance, from the band’s recent slot on Jools Holland.

And for anyone in London next weekend, you can have the pleasure of seeing the band for free as MYD play one of the series of free, open air summer shows at the South Bank (having been there recently, I can vouch for the fact that it’s a particularly lovely venue).

Leaf Melt Yourself Down