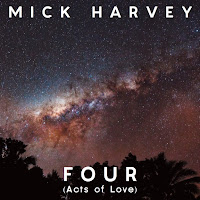 An album released earlier in the year which has appropriately (given the artist involved) burned its way slowly into my consciousness. Mick Harvey is a name half-known to many people, here’s a good recap from a Pitchfork review recently.

Pinpointing Mick Harvey’s identity as a musician has always required a little triangulation. Of his three main points of reference, the closest is Nick Cave, whom Harvey played with in their fledgling band Boys Next Door, then the Birthday Party, and on to the Bad Seeds-- whose primal menace and eerie tenderness Harvey added to immeasurably. Harvey also spent years in Simon Bonney’s collective Crime and the City Solution; by the 90s he’d added a third coordinate, French pop legend Serge Gainsbourg, the source of material for his first two solo albums, 1995’s Intoxicated Man and 1997’s Pink Elephants, the latter of which dared to offer a single Harvey composition. When Harvey left the Bad Seeds in 2009, it was as a superb multi-instrumentalist who had aided, abetted, or interpreted many great singer-songwriters, but who had contributed shockingly little to the world as a singer-songwriter himself.

Harvey’s 2011 solo album Sketches From the Book of the Dead was his first since leaving the Bad Seeds, and it was also his first disc of all original material. While solid, its jazz-folk melodrama suffered from sounding like the average of his three big touchstones. With Sketches’ follow-up, Four (Acts of Love), he’s returned to a more comfortable ratio of originals to covers. It’s a harmonious alchemy. None of the artists Harvey has chosen to cover is surprising; among them are Roy Orbison, Van Morrison, Exuma, the Saints (whom Harvey has covered before), and PJ Harvey (whom he’s covered, produced, and played with).

As noted in that review, this album does bear the weight of Harvey’s previous work – Bad Seeds, PJ Harvey, Serge Gainsbourg – although the smouldering atmosphere also comes out with a shade of Angelo Badalamenti here and there (always welcome) – ‘Where there’s smoke (before)’ is a prime example of this.

Throughout, there is brilliantly spare instrumentation. The PJH song ‘Glorious’ is carried perfectly with just vigorous guitar strumming, a tugging cello and some electric guitar background noise. However the backing vocal that mimics the sustained bent string of a guitar gives a beautiful hint of a Gainsbourg arrangement.

Another memorable moment is the whistling over double bass and plucked guitar strings of ‘Midnight on the ramparts’.

Harvey is one of those (rare enough) enduring artists who I’d happily pay to see anywhere and whose every new release is always worth checking out. This superbly contained album is no exception.