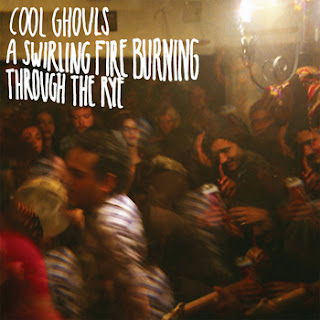 There’s a great freshness about this brand of psych pop from San Francisco band Cool Ghouls.

Unlike many of today’s psych purveyors, they come at it from more of a roots than a shoegaze perspective. Think Creedence Clearwater Revival, for example, a phalanx of clean, jangly but strident guitars with buzzing riffs aplenty.

That’s not to say there aren’t some lovely fuzzy interludes - album opener and single ‘And it grows’ unleashes a great one just 2 minutes in, before reverting to thrilling core values.

But for the most part, the swingingly insistent tunes are carried by sharp sounds and banks of glorious Byrdsian harmonies, with the fuzz pedal being reserved for extra emphasis. The wonderful ‘What a dream I had’ is the perfect example, a hazy medium pacer that produces a guitar solo with a kick like a chilli pepper.

‘Orange light’ takes on the theme, uncoiling an Eastern European-sounding riff, before wrapping it in head-bopping 60s power pop.

After this blistering opening, the album goes on from strength to strength, finding space for a 7 minute epic (‘Insight’), and one top class pop song after another. ‘Get a feelin’ makes the Creedence influence more explicit with an enervating stalking blues.

Finding a track as good as ‘New moon’ down at the end of the album is testament to the overall quality of the songwriting.

It’s a wonderful album with an endearing fresh-faced demeanour. I like it a lot.