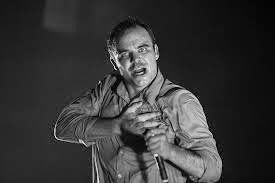 It’s been over a month since I had the great great pleasure to see Future Islands in the flesh. I deliberately wanted to wait a while before writing down some thoughts about the gig. This is a band I’ve been loving on record for over 4 years but who I’d never seen play live before. So I wanted to be sure I was processing the experience fully.

You’ll know all about Sam Herring’s dancing by now, courtesy of that Letterman performance. The Sam Herring Limbo. I feel like it’d be worth going to see Future Islands just to admire the man’s style. And stamina. I don’t know where he gets it. It’s bordering on superhuman. (Side note: the internet is waiting for a gif of the sweat map that progresses across Herring’s shirt over the course of a gig. In Vicar Street, full coverage and colour change were complete in time for the encore.)

You’ll know all about the top drawer tunes, taking a whisper of New Order and lighting a rocket under it. In 2010, they called it post wave (post punk/new wave). Electro pop works for me. Propulsive, in any case. Driven by Will Cashion’s thrumming basslines, while Gerrit Welmers' tumbling synth melodies occupy your waking dreams.

And you’ll know about Sam Herring’s vocal delivery. As if his movement wasn’t enough (manic, wild, other words), his singing is both sweet and savage, often within the same phrase. In fact, watching the gig it became clear that there’s a distinct Jekyll & Hyde split to his onstage persona. The tenderness, the balladry, the fist against his chest. Then the sudden violent switch, the clenched jaw, the bared teeth, the menacing growl - ”I am the tin maaaan”. See it once, you might think there's a pantomime element. See it over and over and you realise the sincerity, the heart behind it. Yeah, lose your shit to that alright.

But what you may not have known - and it was definitely news to me - is that Future Islands are a reincarnation of a certain strain of old fashioned soul music. I mean southern soul in the manner of Al Green, for example. Something hospitable, courtly, nostalgic, a kind of hand holding.

But Future Islands also manage to combine another type of soul music which is a cousin of gospel preaching, the kind where the performer undergoes a transformation before your eyes. Where the singer is visibly a channel for higher powers. Similar perhaps to the kind of transformation, or transportation, mentioned prominently by Nick Cave in 20,000 Days on Earth.

In Herring’s case, the transformation verges on an exorcism, or a shamanic ceremony, such are the physical rigours. There’s a distinct darkness in the growling, a howl, a confrontation, a grabbing by the neck and shaking. Not necessarily a religious event. More likely a punk rock event. Something in post wave alright.

This soul man impression was confirmed for sure when Sam Herring spoke over one musical intro, explaining the background to the song in a courtly southern drawl. (If I’m not mistaken, he even spoke about “good ol’ boys” at one point.) Needless to say, this was completely at odds with the throat-shredding growl that came later. Still though, even at his most bearlike, he held the impassioned demeanour, holding out a pleading hand over the heads of his people. Inclusive and communal. The reason this band is loved.

*One other unexpected titbit. The majority of the crowd was made up of the indie staple 20-40 demographic. However there was the notable presence of several older gentlemen right up front, white-haired, elbows on the stage, eyes on Herring. It made me wonder if the Joe Dolan comparisons (you'll have seen the genius mash-up here) had had the effect of allowing Future Islands to jump a generation.