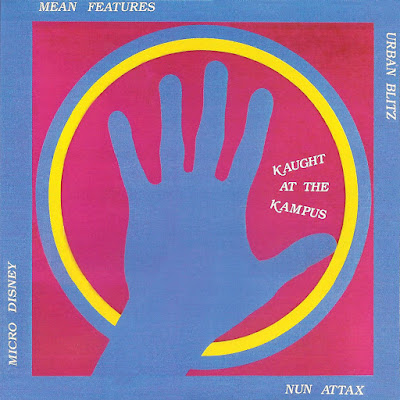 And to finish off this strange July a first digital release for a little treasure from 1981.

Kaught at the Kampus is a somewhat legendary title for people of a certain vintage. Those who remember the Arcadia Ballroom which was the kind of pre-Henry’s Sir Henry’s in Cork.

A rock venue that played host to the fledgling U2 as well as The Cure, UB40 and plenty of other worthy names of the time.

This Downtown Campus was run by Elvera Butler who persuaded the leading Cork bands of 1981 to be part of a live recording.

Finbarr Donnelly and Ricky Dineen of Nun Attax went on to form Five Go Down To The Sea and later Beethoven before Donnelly died tragically in London. Mean Features included singer Mick Lynch who went on to front Stump. And of course Microdisney “spawned” Fatima Mansions and High Llamas later in life. So lots of history in this small thing.