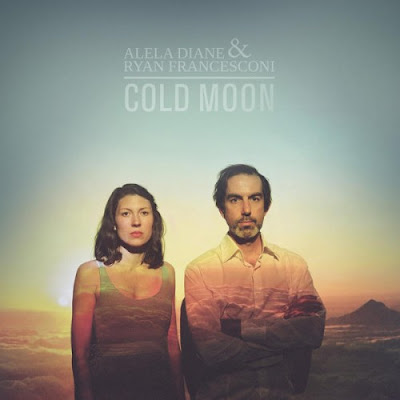 Francesconi’s timeless open tuned guitar - Balkan music is his area of specialty and there is that feel to the tunes - makes a great backdrop for Diane’s wonderfully clear vocals. The latter aren’t cold in the usual sense but there is an icy tone, something crystal, semi-classical in delivery, a plaintive but dignified air and utterly compelling. As pointed out elsewhere, it feels distinctly like winter music overall, as the title would suggest.

While his playing and her singing would be enough to sustain the songs on their own (opener ‘Quiet corner’, for example, has a magnificent dynamic to it, almost like a symphony with its movements, and no other decoration except for an ingenious falsetto vocal harmony), the album reaches another level of brilliance with the few choice arrangement flourishes. Even at that, flourishes is the wrong word. These are perfectly sympathetic shadings, restrained and underplayed.

Like the bubbling hum of feedback on ‘Migration’, bringing the pent up cry at death to the surface. The stately string section (which includes Francesconi’s partner, and fellow Joanna Newsom collaborator, Mirabai Peart) and brass swells of ‘The sun today’. Another glorious brass bed in the title track. The elongated counter vocal of ‘Shapeless’, a great baroque choral touch. The thumb piano and then percussion and handclaps of the same song, an ancient intriguing tribal dance, a prayer to the night.

These are personal songs, intimate essays of contemplation against masterful musical settings. (Interestingly, their working process began with Francesconi sending Diane the tunes in instrumental form. Over time, her writing formed around the music, drawing compelling resonances from it.) Of existence, the natural world, our knotty unsavoury modern lives, how to reconcile these puzzles. And, on repeated listens, a bracing clear-eyed musing on death.

A wonderful and moving piece of work.