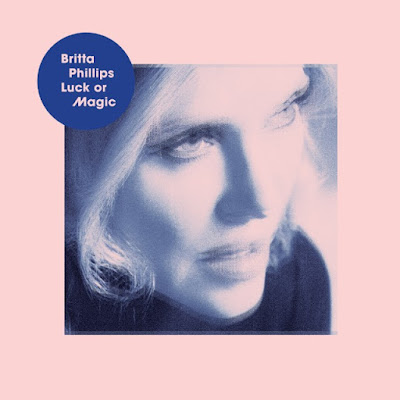 It feels a bit strange to be talking about debuts almost 30 years into a music career but this is the debut solo album of Britta Phillips, of Dean & Britta and Luna fame.

The album contains five originals and five covers. A couple of the originals have appeared in some form elsewhere before, the driving thrumming New Order-ish ‘Million Dollar Doll’ on the soundtrack to the Noah Baumbach/Greta Gerwig film Frances Ha, and ‘Ingrid Superstar’ from the 13 Most Wanted/Andy Warhol Screen Test project soundtracked by Dean & Britta, with a lovely late night, mellow but slightly haunted, Velvet Underground feel.

In general, the album is pleasingly out of fashion, if you know what I mean. There’s a cover of a little known Abba song, also the very well known ‘Drive’ by The Cars, the reasonably familiar Fleetwood Mac song ‘Landslide’ and the sumptuous Dennis Wilson cut ‘Fallin’ in love’.

There are pillowy synths but also the signature and beautiful spidery guitar lines of Dean Wareham.

My favourite though is the gorgeous ‘One fine summer morning’, originally a 1969 hit for Evie Sands. It’s full of suspended strings over acoustic guitars, a knock out flute arrangement (not everyone’s cup of tea I know but perfect in this winsome bittersweet setting) and – most crucially for me – a series of indiscriminate semi-choral rushes under the main melody. These have the effect of lifting and lowering you like a wave and would remind you of those unbeatable Bob Lind songs from the mid 1960s.

Britta’s voice is also clear and upfront which isn’t always the case, maybe because she’s become a very good team player over the years, a reliable sidewoman, rarely centre stage. It’s great to hear her like this and it seems to me that the tempo and arrangement of the song fit her voice perfectly too.

It’s hazy beautiful dream pop and I hope she doesn’t wait another 30 years for the follow up.