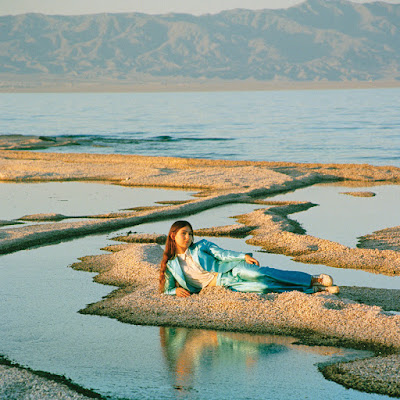 Welcome to the captivating, transfixing world of Weyes Blood.

Two words have cropped up a lot in reviews of this album – stately and compelling – and both are valid.

Stately because there’s an unrushed and a certain and deliberate stance in the delivery of these songs. If stately makes you think cosily endearing, think again, because there’s also a confrontational character to them which makes sense in light of her previous work with Ariel Pink and Jackie O-Motherfucker.

Compelling because those very qualities, when added to the glorious voice of Natalie Mering, make the songs impossible to turn away from.

The melodies soar, taking flight on her voice. In its lower register it has a little of the stoicism of Karen Carpenter, a comparison point which only adds pathos and poignancy to the overall sound. Listen to the way she sings “do you need me like I need you” on ‘Do you need my love’. Or the chorus of ‘Generation Why’, “Y-O-L-O why”, which could easily be hilarious in another context, but here is more likely to send a chill down your spine.

The songs are long (longer than average anyway), the lines are long, and the voice spends all that time wrapping around you, above washes of keys, piano or circling guitar arpeggios, plenty of time to let the gravity sink in.

There’s another element to the compelling nature of this music. The very subtle warping around the edges, the psych really, like the distortion (is it autotune?) on the backing vocals on ‘Generation Why’. A similar layered, transcendant, Julianna Barwick-like feel floats around ‘Can’t go home’, coming out sounding like a prostrate secular hymn.

‘Seven words’ seems to be straighter at first but the slightly off double tracking of the (again too beautiful) vocal signals a more ambiguous path. A broken, lost, bereft one. A Karen Carpenter one maybe.

The more you listen the more you hear the blues seeping out through the serene delivery, audible pain among the beauty. It makes for songs of tremendous depth and full of emotion.

Compelling is the word alright for this absolute work of art.