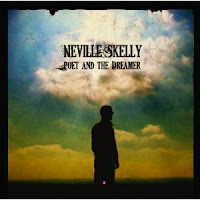 We had a couple of excerpts on this week's show of a recent interview with Neville Skelly, the Liverpool singer-songwriter, whose debut album Poet & the dreamer is out now through Setanta/PIAS. It was a very interesting conversation, taking in Neville's early big band and song stylist influences (courtesy of his father and uncle), how crooning is not a dirty word, how he hooked up with near-neighbours The Coral who introduced him to Dion Dimucci (of Dion & the Belmonts fame), earning his chops on open-mic slots, and more. Listen to the full interview here.

Particularly interesting I thought was Neville's mention of the invention of the microphone, as the catalyst for the style of what he called "lyrical singing". The phrase was new to me but he explained it as a more intimate or soft-spoken singing technique. Up until that time, singers with backing bands would have had to belt out their vocals to be heard, or depend on the consideration/skill of the band. With the advent of the microphone, of course, and the control it gave singers, a completely different style of singing was possible. This style might be called "crooning", or come to have been associated with "easy listening", derogatory terms to some people but not around the UOH camp.

One of the standout songs on the album for me is one of the two Dion Dimucci covers, He looks a lot like me, with haunting steel guitar played by Scott Marmion. Have a listen here - the arresting, spookily beautiful images are provided by Loretta Lux.

The album is made up of twelve tracks, six covers and six originals co-written by Neville. Five of these originals appeared on the Child of the morning EP which came out last year. This is what I thought of it at the time.

Neville Skelly - Child of the morning EP (Setanta)
Sublime set of (loosely) country swing tunes from the Liverpudlian, with a handsome croon at the centre, and adorned quite gorgeously with steel guitar, piano, glockenspiel* and harmonica. Very much in the style of Mike Nesmith's solo material, which is of course a pleasure. Nothing less than magnificent.

(*Reading the album credits, it looks like I mis-heard that glockenspiel - it's actually vibes instead. It could happen to a bishop...)

Funny, listening to the songs now, I'd put Jimmy Webb higher as a reference point, rather than the ex-Monkee. The Glen Campbell interpretations of Wichita Lineman and By the time I get to Phoenix, I'm thinking of in particular, more for the swooning arrangements and overall mood than anything else. Come to think of it, they share that strong narrative style of songwriting as well, along with a certain melancholy undertone. You could even make a comparison between Neville and Richard Hawley (as my wife pointed out, correctly as usual), in terms of the gorgeous expressiveness of the voice. Lyrical singing is right.

Of the six original songs on the album, four are co-written with James Skelly, singer with The Coral, and one with Ian Skelly, his brother, the band's drummer. Though no direct relation to Neville (I've since come across reports that they're cousins, but those are unconfirmed), the chemistry between singer, songwriters and arrangements is there for all to hear. It sounds nothing like a foreign singer parachuted into a band for the first time. It sounds everything like songs played and worn over time and delivered with complete conviction. The production by Ian Skelly is also unfussy and sweet. As well as the two Dion songs, there are Woody Guthrie, Phil Ochs and Jackson Frank covers, and this smoky version of Eleanor Rigby.

Neville's revelation that it was The Coral's Skelly brothers who introduced him to Dion Dimucci reminded me of an interview I read with Ian Broudie once where he spoke of his admiration for The Coral (he's also an admirer of Neville's, by all accounts). He singled out for praise the fact that they were into doo-wop, an unfashionable rarity among English indie bands. As is a contemporary male pop singer who's into song stylists like Tony Bennett or Bobby Darin (we don't need to detain oursleves with the eternally auto-tuned and expression-free Michael Bublé). You might say the album is a little bit old-fashioned actually, and I like that about it. Do yourself a big favour and get it, it's a timeless and beautiful piece of work.
Dion Dimucci Ian Broudie Ian Skelly James Skelly Liverpool Neville Skelly PIAS Setanta The Coral