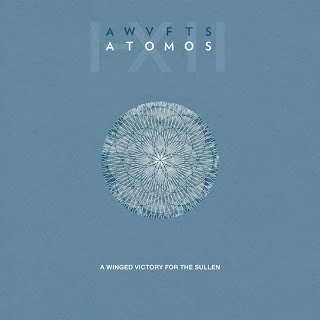 And as with the first album, despite (maybe because of?) the poise of the music, the restraint, there’s still something deeply romantic about it. What does that mean? Well, it seems to connote some vague sense of human yearning, something primal. Maybe for love, contact, a search for identity even, in this universe of ours.

The melodies are simple and direct mostly, lead by O’Halloran’s piano or strings, unshowy but massed and layered for maximum impact. Those melody lines are like the miniature details close at hand, while Wiltzie’s industrial interventions act like premonitions of infinity. The skittering samples of distant radio voices on ‘Atomos IX’ and ‘Atomos X’ for example, filtered and distorted so as to be out of reach of understanding.

That directness makes me think of other classically-trained musicians who have “dialled down” their technique to great effect to escape the strictures of classicism - perhaps also in search of a more authentic form of expression - people like Julia Kent and Matthew Bourne. As with those, the tone and bearing of this album is one of unstrained gravitas, a dignified air in no danger of earnestness.

It’s particularly vivid music too, bringing to mind specific imagery. For example, you could imagine some of those evolution scenes from 2001: A Space Odyssey over the early, tentative notes of ‘Atomos VII’. The suspense, the slow release of tension into a machine drone as the strings submerge.

And as you’d expect from any meditation on the human condition – for that is exactly what this album feels like – there is heartrending, sumptuous melancholy at every turn.

Let yourself get lost in it, it’s another wonderful piece of work.

*The genesis of the album by the way was an invitation from dance choreographer Wayne McGregor. Listen to Dustin and Adam speak about that below.