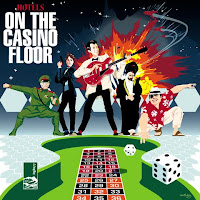 The interview (phone) with Blake Madden from Seattle band Hotels is available to download now in full (23m45s, 70MB approx) - we had played a short extract on this week's show. The conversation ranged over film music, casinos, manipulating mood in pop music, John Barry, being based in Seattle, playing bass while singing, surf guitar, and of course the excellent new Hotels album On the casino floor. These were my thoughts on that album, from a few weeks ago.

Hotels - On the casino floor (Hidden Shoal)
A concept album of sorts from the Seattle band with a madly ambitious premise, too good not to quote from the press blurb. The plot concerns a "secret agent, his former mentor and current arch-nemesis, and a nefarious prince's plan to destroy Earth during the grand opening of the universe's only outer space casino complex" (!). This would be good enough in itself but happily the musical chops match the scale of the ambition, with elements of surf-rock and post-punk, a dollop of film soundtracks, as well as a hint of decadent and very welcome lounge. You may already have had the great pleasure of hearing first single The bat watusi, a wonderful Dick Dale-style bassline strapped onto a louche vocal with ray-gun synths in pursuit. A shimmering suite of tunes overall, which eschew standard verse-chorus structures but still retain a firm grasp of pop dynamics (for example, the delirious crescendo of From the west, the glorious wall of sound of the title track, the John Barry-like uplift of Sleep in fame). And at the centre, Blake Madden's sonorous croon. Highly recommended.

*I have to mention also that the hummable bass intro of Trouble at the consulate reminds me very much of early Go-Betweens (I'm thinking Springhill Fair era) and my religion obliges me to show love to anything with a hint of Grant McLennan.

**Watch out for an interview with Blake Madden coming up soon - it turns out he prefers the term "soundtrack to an imaginary film" to "concept album". That works for me.

To be precise, he suggested we think of the album as a soundtrack to an (imaginary) remake of Casino Royale - an intriguing prospect. Blake also made a particularly interesting point about instrumental music, making a case for its rehabilitation from the "niche" of film soundtracks or avant garde fringes. He reminded of the time (not that long ago) when instrumental music was all over the pop charts and the lack of a singer was not deemed a major impediment, citing surf group The Ventures as a main example (we had Walk don't run on the show in honour of the mention - the likes of The Shadows and Dick Dale also spring to mind). I'll drink to that. So here's to instrumental music and here's Blake, enjoy.