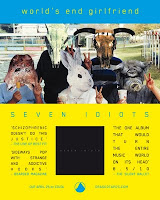 Beautiful and challenging 7 minute opus from the Japanese composer's new album. Comparisons to Cornelius are inevitable and WEG does skim across genres like a stone over water (pointedly, another track on the album is titled Teen age Ziggy). Amidst various classical and IDM references though, the overriding impression of this epic instrumental is of the golden ages of pop music, with Bacharach-like string sweeps and 80's power pop, punch-the-air choruses. There are also cameos straight out of the Hard Rock Café. Nothing but glorious and uplifting pop music, all round.