Ennio Morricone - Are you in or out?

September 01, 2011
A few years ago, I came to a conclusion. I decided that the world was divided into two types of people. Not doctors and nurses, as Brendan Behan (quoting the English painter Constable, I think it was) once famously told Eamonn Andrews in an early Irish tv interview. The two types of people I'm talking about are

those who love Ennio Morricone
and
those who don't. 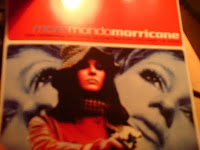 I decided that anyone who didn't appreciate the music of this man was a philistine, could not be trusted and could not be my friend. This radical division of humanity was brought on by immersing myself in More Mondo Morricone, a compilation brought out by the German Colosseum label in 1996. The subtitle on the album gives you key information about the content - "more mindblowing film themes by Ennio Morricone from Italian cult movies". (If ever a product description perfectly matched the contents, that is it.) This was the second in the Mondo Morricone series. There's a great review of the Trilogy Box Set release (all three in the series reissued together) over on Pitchfork by Alex Lindhardt - if you can dodge the hyperbole, there's plenty of good information in it.

I particularly like this line from that review - it pretty much sums up my own feelings.

If you don't know Ennio Morricone beyond The Good, the Bad, and the Ugly soundtrack, your life is a sham, your friends are holograms, and your soul is a barren wasteland where maggots greedily feast upon heartlessness and willed ignorance.

Indeed. Which is not to say that it isn't a great soundtrack mind you - it contains one of the most iconic and recognisable pieces of music on the planet after all. Although very different in overall mood from the Mondo Morricone selections, the main theme does contain some of their trademark features - massed choirs and other vocalisations (waw-waw-waw), characterful flutes and trumpets etc. (Reminds me, I must put together that mixtape of tunes featuring whistling...)

By the way, I'm not generally a fan of those "Music from the Movies" concerts. However, I'm prepared to make an exception when it's the composer himself conducting and there are more than 50 musicians onstage. This is a full orchestra, with female soprano and choir performingThe ecstasy of gold from The Good, the Bad & the Ugly, recorded in Munich in 2005. It's stirring stuff.

It was through his work on the spaghetti westerns of Sergio Leone , of course, that Ennio Morricone made his name internationally. But the Mondo Morricone series deals with his domestic output outside of those films, from around 1966-1977 (which many people would say is his prime, and I'd agree). And the man has been incredibly prolific. He has composed more than 400 soundtracks, covering film and television, from 1961 to the present, and has worked with Bernardo Bertolucci, Gieuseppe Tornatore, John Houston, Dario Argento, Pier Paolo Pasolini, Terence Malick, Roman Polanski, Roland Joffe, as well as Leone, among many many others. You can get the full list below - he really has taken Bernard Herrmann's statement, to the effect that modern composers should engage with the medium of film, to heart.

The reference in the subtitle to "Italian cult movies" can be taken as code for skin flicks or B-movie horrors, I imagine the Euro equivalent of the kind of stuff Roger Corman was pumping out of California in the 1950's and 60's. Except with soundtracks of staggering depth and sensitivity and sensuality. This is one of my favourite tracks from More Mondo Morricone, the absolutely gorgeous Come Maddalena (Like Maddalena) from the 1971 film Maddalena. It's got at least three things that you should fall in love with on the spot - the breathy pleadings of Morricone's regular vocal collaborator Edda dell'Orso, a ceiling-high church organ and harpsichord melody section, and a massed choir paired with swooning strings. At about 7 minutes, this clip is missing over 2 minutes of a drum intro - which is unforgiveable - but it's still great. (It also features a completely out of context photo of Madeleine Stowe from, I think, The last of the Mohicans, but never mind.)

Another gem, Sospiri da una radio lontana (Sighs from a distant radio) has Edda dell'Orso again leading the way, this time with what could be some comedy moaning from a Carry On film. This is quickly overtaken though by some beautiful, mournful trumpet/clarinet lines straight out of the Burt Bacharach songbook, more breathy vocals and brilliant glockenspiel and keyboard pairings. From the 1975 film Paura sulla citta (A town in fear).

Check this sublime instrumental as well, 18 Pari (18 Equal) from the 1972 film Un uomo da rispettare (A man to respect) which starred Kirk Douglas. It's an infectious bossa nova backbeat with staccato Hammond organ and twirling flute.

These three tracks show how embedded Morricone is in popular culture, and especially his influence on pop music. A band like Stereolab, for example, have clearly taken note of his arranging style, as you can hear on this song, Miss Modular, from 1997. Fermale, non-verbal vocalisations, stabs of Hammond organ and brass swells, all there.

And, in fact, they are on record about this influence. Here's an interview with WAH2 where Tim and Laetitia speak about Morricone's arrangements, and how they extract meaning out of musical noise. (They also mention the castle he lives in and his many guard dogs, but that's another matter...)

After my obsession with More Mondo Morricone had run its course (for the time being), I went after more of the man's work. And funnily enough, about a year ago, Britta Phillips of Dean & Britta fame posted a video on her facebook page, the main title from the 1969 film Vergogna Schifosi (The dirty angels). It's got the glorious Edda dell'Orso again, with a great soaring soprano, duetting with a completely swoonsome orchestra. Nice and neat the way Dean & Britta closed this particular dream pop circle. Because dream pop doesn't get any better than this.