Roll the Dice – In dust (Leaf) 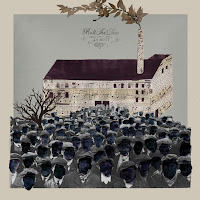 This is a kind of concept album about life in the modern metropolis, with a soundtrack of machines at work, from the Swedish duo made up of Malcolm Pardon and Peder Mannerfelt. It’s one of the most evocative and strangely groovy collections you’ll come across. Favouring analogue synths over digital, they’ve managed to capture the rhythmic, repetitive, grinding, but also messy, untidy, unpredictable character of urban life. Or, if you prefer, they’ve made an intriguingly semi-pop series of electronic instrumentals, that also manage to have some jazz improv and Krautrock in them. 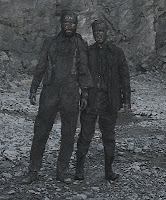 The elements range from the buzz of static to broad, sweeping synths and dubby bass pads, stop-start industrial clanks and the swoop, suck and throb of circuitry in general (one track is actually called The suck), all combining in a sort of machine swing dance class of the (near) future. However, one of the most appealing features of the album is its terrific, busy, spidery piano riffs (used to particularly memorable effect on Way out and See you Monday). These take on the role of a pulse, allowing the synths to take melody, in wonderful kosmische style, and bass, to some of the farther reaches of dub. It’s like being taken on an alternative tour of a city, through factories, workshops, past conveyor belts, typing pools, the hum of traffic and the clatter of man-machine interactions vying for your attention at every corner. It’s warm and thrilling, with a hint of danger.

Calling All Workers by Roll the Dice

The intention, Mannerfelt explains, was to create something “a little unsettling and claustrophobic”, and also “overwhelming”. It’s certainly all that but still, the redemptive moments stand out for me. The four-note descending pop perfection of Way out; the cinematic grandeur of Maelstrom; the beautiful, shifting waves of See you Monday; the dignity amidst the grime of Cause and effect; the intoxicating throb of Calling all workers, gradually subsiding under a plaintiff melody.

Mannerfelt has spent time as a member of Fever Ray, and Pardon has composed film and tv soundtracks. This album has a character all of its own though. In the end, it’s dramatic pop music with a distinctly underground edge, and a rounded and completely engaging narrative woven through it. A towering, 21st century piece of work.