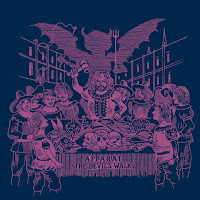 This is a beguiling album of emotional songs from the Berliner, featuring lyrics with a broad romantic (in the Keats and Shelley sense – in fact the album title is apparently a nod to a Shelley poem from 1812, how cool) sweep.

But while the words wonder and brood in melancholy, almost metaphysical fashion, the surging, fizzing soundtrack reaches for the sky.

The stall is set out from the beginning, in the shape of the celestial choir and circling, Reichian synths of opener Sweet unrest. You’ll probably already have heard the sublime single Song of Los, which manages to combine a semi-operatic vocal with a twitchy two-step (it reminds me of CocoRosie in a way), to make a tune of soaring emotional power. That title refers to the genesis of the album during a break from touring in Mexico in 2010, and there is a kind of sun-bleached, morning-after quality to a lot of the music here. For example, the beautiful, pulsing, shoegaze build of Black water and the widescreen, Sigur Ros-ish hymn to lost youth Escape.

One of my favourite moments on the album is The soft voices die, which draws on chamber pop using the warmth of a vibraphone and the tug of strings, above a whirring electronic sample – you can see why Thom Yorke might be a fan. The second half of the album brings more of the dancefloor to bear, for example the rushing, bleeping Ash/Black veil. There’s also a lovely vocal cameo on the lullaby Goodbye by Anja Plaschg of Soap & Skin, but it’s Sascha Ring’s vulnerable lead vocal that holds the album together. It’s open and engaging, a voice that could not be more accessible, more pop and less underground, despite his techno beginnings. So much so that it could sit comfortably among any of today’s chart heroes. That’s not a put-down – it’s high praise from me. In fact, it’s a triumph. To wrap a feature which has so much of the mainstream about it, in layers of inventive, intriguing textures and rhythms, is one of the achievements of the year. It’s a wonderful thing.