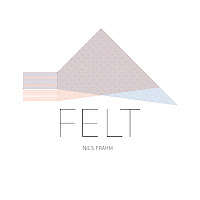 Another set of sublime neo-classical instrumentals from the Berlin resident, which shed new light on the full dynamic range of the piano. By close-miking the instrument from the inside, and playing the keys softly (it’s practically his signature style), Frahm exposes an unexpected set of sounds. Actually, the album almost qualifies as a field recording where the field is the inside of a piano, and the listener is surrounded by the sounds of the room fed through its natural reverb and decay, at least as much as the notes coming from the keys. The resulting arrangements feature microscopic rumbles and creaks and clicks as a kind of supporting orchestra arrived from the wings, and headphones are recommended/essential to get the full benefit.

The title apparently derives from Frahm’s need to quieten the piano notes to show consideration for his neighbours during his nocturnal practice sessions. To achieve this effect, he layered thick felt in front of the piano strings. At times though (for example, Old thought, More and Kind), the close-up attack of the hammers - that relentless, wooden, rhythmical tapping - calls to mind a miniature marching army, or the undeniable inner workings of a clock. It’s an intriguing contradiction - this undercurrent of busy, frantic activity, while stately melodies glide past above. You could read it as a metaphor for the pounding, emotional heart beneath a straight face. (With its “middle of the night” backstory and meditative atmosphere, you could also consider it a companion piece to labelmate Peter Broderick’s recent soundtrack collection Music for Confluence.) And this is very emotional music. As Frahm notes in the press release, a description of his reaction to the music he plays -

My heart opens and I wonder what exactly it is that makes me feel so happy. 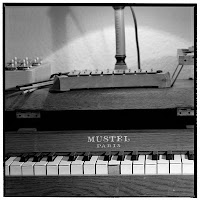 You’ll find last year’s single, the absolutely gorgeous Unter (with the addition of an eerie, whistled outro). Other instruments make cameo appearances - twinkling glockenspiel and sparing synths float in and out. There is also the unmistakeable sound of recordings made onto tape – confirmed by the beautiful accompanying studio portraits – allowing a broad audio field. This is a reflective album but it has an endearing openness, and it’s still perfectly capable of making you hum along with its infectious melodies. Another triumph for neo-classical pop music.

*On further listening, I’d have to add that the wonderfully light-fingered Old thought has a particular cinematic quality - no doubt helped by the widescreen, recorded-to-tape ambience. Its stalking, suspenseful piano pattern also shows that neo-classical pop music has more than one string to its bow, mood-wise.
Berlin Erased Tapes Neo-classical Nils Frahm Peter Broderick