October 26, 2011
Second album from the London 5-piece (who used to be Dark Captain Light Captain in the days of their wonderful debut Miracle Kicker), full of propulsive rhythms and hushed vocal harmonies. Where their debut album was bound to make you think of an imaginary Elliot Smith soundtrack to The Wicker Man (folk with a twist, we’re saying), the beats are more prominent this time around. 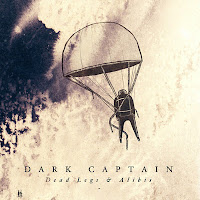 We’ve already spoken about the first single Submarines, a salutary tale built around a powerful hi-hat and snare two-step backbeat and a matrix of acoustic guitars – it also features a meltingly gorgeous melody. One of the most noticeable new threads this time is some lovely high-tone bass work (for example, 3 years to go – am I the only one who thinks it sounds like a slowed-down baggy beat, a la Ride? In fact, the shuffling Ex detective has a hint of this too, come to think of it…I’m all in favour by the way – and Different and easier, which comes on like a folky Stereolab, complete with an intriguing brass wash). In other highlights, Long distance driver begins by putting a plucked acoustic guitar pattern and wind chimes to beautiful, shimmering effect, until the loosest and grooviest floor tom gets the motor running, and another great brass drone fills out the landscape. As the album goes on, an undercurrent of krautrock comes pleasingly into view - 80000 reasons has an air of it, although maybe more of a leisurely secondary road than a relentless autobahn. Strange journeys home even throws an element of breakbeat into the mix, although in the subtlest possible way and without interfering with another immaculate melody. Even if the band wanted to completely discard the folk tag (I personally doubt they do), they’d find it hard while still producing haunting tunes like Fade. Whatever the materials or genre debates, what Dark Captain have produced here is a brilliantly crafted and hook-laden set of slightly melancholy but still classically uplifting pop songs. And we love that.