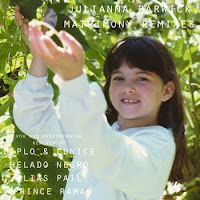 Beautiful new release from Julianna Barwick, who is one of our favourite singers/artists around here. Her fantastic album The magic place came out earlier in the year, also on Asthmatic Kitty - this was the UOH verdict at the time.

From the opening strains of Envelop, with multiple wordless, heavily treated vocal parts creating texture as well as melody, you know you're in the presence of something special here. By the end of that track, as a distressed piano line gradually swamps the vocals, a haunting, heartrending mood has taken over from the initial bliss. The title track is a choral symphony which slowly disintegrates into a lone soprano. Cloak sounds for all the world like a line from a church hymn sampled and looped, until its layers gather a power not witnessed in any church I've ever been in. White flag creates the effect of standing at the mid-point of three competing choirs, which somehow manage to complement each other. You could quibble that a sameness sets in midway through the album which might have been broken by the use of more percussion or rhythm parts (as hinted at on Vow and Prizewinning). But that's like taking issue with Michelangelo's choice of colour tone on the ceiling of the Sistine Chapel. And it would miss the point too, because Ms Barwick is composing a hymn of praise to the human voice, with the effect of strongly suggesting forces beyond the human domain. Solemn, moving and utterly transformative.

Mmm. The remixes in question are of the above-mentioned Vow and Prizewinning, the remixers Prince Rama, Alias Pail, Diplo & Lunice and labelmate Helado Negro - the two original tracks also appear. I'm not sure any of the remixes reveal anything more special than the originals, but any excuse to highlight this music. It's mindblowing, really, to use a word.