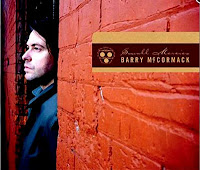 If you’re of a certain age, you’ll remember Jubilee Allstars, a Dublin band from around the turn of the last century who had some great, downbeat alt country tunes and flirted with (major) record label success. Barry McCormack was the singer and main writer in that band and went on to record and perform solo when the Allstars split. (I remember meeting Barry about ten years ago in Nancy Spain’s – that used to be a live music venue in Cork, kids – supporting The Pernice Brothers; he was a regular visitor to the city on such support slots around that time). This is his fourth solo album but his first to be recorded with a full backing band. I’m sorry to say I’ve heard none of the other three, but I’m glad this one found me.

The first thing to mention is the lyric sheet, because this is an album you should read as well as hear. The lyrics are printed in full, they are lengthy and they read like a series of dirty realist short stories or prose poems. On first glance, the songs seem to sit on the introspective, gloomy end of the mood spectrum (titles like Hard times (Drunk at the kitchen door), Hard is the road and Bad enough support that impression, in fairness). But let them soak through fully and their earthy, black humour comes to the fore. Check out the rock ‘n roll turn of phrase to this genius opening of The dogs on the street –

”Paul was in the office up to his arse in P45’s
The bosses roamed the halls, they’d taken out the knives
Some of us were worried, some were running for their lives
Paul had got the shingles
I was coming out in hives”

As well as being marvellously entertaining, those lines tell a lot. I’ll hazard a guess that this is the first Irish album to address or describe the cultural or emotional landscape of the country in the aftermath of the recent political chicanery and financial collapse. Just not in a David McWilliams kind of way. The character of the title track opener ponders the descent of his fortunes, while noticing that the pawnbrokers had packed up during the boom times. All around, there are dole queues, ghost estates, disappointment, thwarted love affairs and people drowning their sorrows. 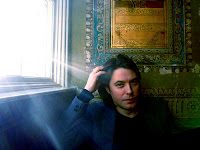 ”And the dogs on the street know
Every gouger in Christendom knows
When the game is up, when the tide is going out”

In the end though, there’s a moral to be had in a vivid, whiskey-soaked dream prompted by a trip to Cork (I remember Kent Station), featuring the looming presence of Father Mathew, The Apostle of Temperance.

That theme of the indomitable spirit is a regular refrain on the album. Which leads us to one of its highpoints. The Ghosts of Pigtown is a raucous, Poguesian barroom singalong, an end-of-the-world Dublin zombie movie in technicolour as if written by Pat McCabe, with the smell of piss, lust and desperation on the streets. There is a strange kind of redemption for the narrator by the end though, in the shape of the realisation that he’s not alone in having a “mortal fear of waking up alone”. Small mercies indeed. The musical setting is an incongruously jaunty waltz with piano and massed backing vocals. It would also tend to put one in mind of Bob Dylan a little - a kind of muted, mini-epic version of Desolation Row.

Throughout the album, the musical backing is subtle, the central character of McCormack’s voice given its rightful place centre stage, full of wonderful street inflections and rhythmic colloquialisms, with just the odd sparing and sympathetic keyboard from John Hegarty, or sombre guitar solo by Shane McGrath. And with Stephen Shannon at the desk and Stephen Quinn on mastering duties, the sounds are superbly rendered on to record. This album is a poetic and moving document of Ireland in 2011. It is also a superb folk record about love and loss, in possession of a rock ‘n roll heart, and that is more important to my mind.