November 02, 2011
We've spoken about Serge Gainsbourg in these pages before. His Histoire de Melody Nelson album from 1971 is one of the great concept albums, in fact albums full stop. Which you might not guess to read this description. 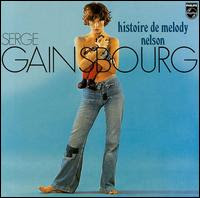 You don't need to speak a word of French to understand Histoire de Melody Nelson - one needs only to look at the front cover (with its nearly pornographic portrait of a half-naked nymphet clutching a rag doll) or hear the lechery virtually dripping from Serge Gainsbourg's sleazily seductive voice to realize that this is the record your mother always warned you about, a masterpiece of perversion and corruption. A concept record exploring the story of - and Gainsbourg's lust for - the titular teen heroine, Histoire de Melody Nelson is arguably his most coherent and perfectly realized studio album, with the lush arrangements which characterize the majority of his work often mixed here with funky rhythm lines which underscore the musky allure of the music. Perhaps best described as a dirty old bastard's attempt to make his own R&B love-man's record along the lines of a Let's Get It On (itself still two years away from release), it's by turns fascinating and repellent, hilarious and grim, but never dull - which, in Gainsbourg's world, would be the ultimate (and quite possibly the only) sin.

Apart from the lapse into "Gainsbourg the lech" cliché", there's one major ommission in that. It makes no mention of the album's arranger and co-writer, Jean-Claude Vannier, who has by now become a legendary figure in French pop history. A new album of (almost all) previously unreleased material on Finders Keepers Records is as good a time as any to dig out some of his other music (we also played a track on the show this week).

Before we get to the new release, we need to mention an earlier Finders Keepers gem, Vannier's "imaginary soundtrack" from 1972, L'enfant assassin des mouches (The child fly-killer). With sleevenotes/plot written by Serge Gainsbourg, the album is an obvious companion to Melody Nelson. Without further ado, here are a few tracks from it.

Some distinct Morricone-style shapes on the vocals on this number, albeit in an incongruous funk-rock setting.

Serge's notes on that last one -

As the child approaches, the king's guards take up a warrior's stance, then move aside revealing the king of the flies playing billiards.

As you can see, you're in the wrong place if you're looking for a linear plot. With percussion, horn and string sections, a children's choir and everything including the kitchen sink (piano, flute, bombarde, among others) played by Vannier himself, aswell as copious field recordings, and of course JCV's incomparable arrangements, it's a surreal pop masterpiece. By the way, Andy Votel, of Finders Keepers, contributes four pages of excellent and detailed background on the man's career to the sleevenotes - another reason to get your hands on an original copy of this.

And so to Electro-Rapide: Experimental pop instrumentals from Jean-Claude Vannier's vintage vaults, to give it its full title. You'll find some audio excerpts on the Finder Keepers link above, but here's the one Youtube clip I've been able to find, taken from the album.

That's some of the most brilliant use of marimba (or is it vibes) you'll ever hear. Vannier's own sleevenotes are illuminating throughout, but particularly fascinating in this case, including his mention of learning his trade, playing hotel piano in Algeria as an 18-year old, and the reason for the track title. The album features tribal percussion, children's tv music, library music, jazz and orchestral stylings, among other things, recorded mostly with his regular "Wrecking Crew" of crack musicians between 1968 and 1976. Essential is a word that's bandied around a lot when it comes to music, but this album truly is.

We could go on of course - SG & JCV's other soundtrack collaborations, JCV's production of Jane Birkin's first album, his work with Brigitte Fontaine and other French vocalists - but that's for another day.
Andy Votel Finders Keepers Records Jean Claude Vannier Serge Gainsbourg