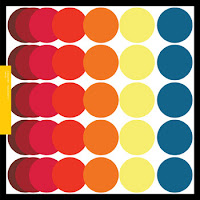 In a break with tradition, I've decided to put up an interview without broadcasting an excerpt on the show first. So here's Crystal Stilts speaking to me before they played in Dublin, just over a week ago.

The soundcheck was running late when I arrived at the venue (just as well as I was running late myself) – I learned that the band had missed their flight from London earlier in the day. I occupied myself downstairs with a beer and the crossword, while taking note of what passes for hipster in Dublin - it seems to be all about the manicured beards. Presently, the excellently moustached (but far from manicured) keyboard player Kyle found me at the bar and we repaired to the band’s dressing room, which was festooned with fake trophy antlers and period furniture. Kyle fell asleep, citing jet lag, but the rest of the band contributed fully to a discussion of…

…the cultural landscape of South Florida (where Brad & JB grew up - it's dominated by beaches and techno, apparently), recording their second album as a band unit as opposed to their first album as a series of overdubs, the challenge of making a living as a band in the internet age, decipherable vocals and dreamlike lyrics, the advantages of taking time to write new material, raising the musical bar for yourself and that “wild mercury sound” (the Irish presidential election and Alec Baldwin meets the Occupy Wall St protesters also featured but unfortunately didn’t make it on to tape – you’ll have to take my word for the fact that those topics were also lively and entertaining).

(Apologies for the low levels on JB and Keegan, they were sitting at the opposite side of the room and circumstances didn't allow a roving mike.)

I must say I regretted not having more time to chew the fat with the band. JB, for example, despite coming across as very shy and soft-spoken, gave the distinct impression of being perfectly happy to be drawn out on the specifics of guitar sound and production, among other things. 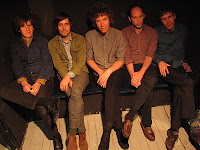 The gig afterwards was tremendous - and all the better for being very eagerly anticipated. It was my first time in the Grand Social and grand is the word. Dark, compact and excellent sound (they also sell burgers in the smoking area/balcony, which is not a drawback). The Stilts hit their stride straightaway, channelling the pre-60's sounds of surf rock (if I'm not mistaken), Joe Meek and echo chambers. They also produced the aforementioned "wild mercury sound", a thrilling garage rock beast with the addition of a swirling, coruscating organ. I feel bad about singling any one thing out for special mention but the bass was particularly great, a brilliant fluid bounce to it. And the guitar swinging between a choppy attack, a la Stirling Morrison, and a chiming Roger McGuinn. That time spent recording the album as a band was NOT wasted. The standouts for me were Half a moon , Shake the shackles and the intoxicating song Dark eyes (the lead track on the new Radiant door EP on Sacred Bones) all impeccable, urgent, underground pop classics. Big up to Harmonic and Skinny Wolves for putting the gig on.

A word about the opening band, Girls Names from Belfast. They tended to put one in mind of similarly pre-60's sounds, with wonderful lasso-like guitar runs reminiscient of The Shadows (via Johnny Marr and the C86 sound, mind you). They had a nice metronomic bass and impressive no-nonsense drumming with little need of cymbals. They also managed to sound like a speeded-up Orange Juice in places, which is a great thing.