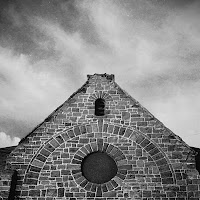 Another notable release from the prolific Mr Broderick. It’s a double A-sided single featuring the only sung track from Music for Confluence (album reviewed here), backed with an instrumental from another soundtrack he’s found time to work on, Grace and Mercy, a documentary about Haiti after last year’s earthquake. Purchasers of the single get the added benefit of a digital download of the full 14-track soundtrack to the latter. Having heard it - it’s another hauntingly beautiful series of piano and guitar-centred instrumentals wrapped in an ambient gauze - I recommend you do the same. The man’s ability to evoke a range of emotions from a few (deceptively) simple materials is quite amazing. The wonderfully woozy Fibromyalgia, with a chorus of sliding, drunken violins, is my own favourite.

Grace + Mercy. A Film of Haitians helping Haitians. from luis pena on Vimeo.