November 20, 2011
We love a bit of Field Music around here. So imagine how happy we were to hear the news about the new Field Music album, due out in February 2012. It'll be called Plumb, and will be released on Memphis Industries. Here's the stream and download.

Field Music - (I Keep Thinking About) A New Thing by memphisindustries

It sounds very much like a continuation of where (Measure) left off, which is to say, great. And it seems timely to upload the interview with the Brewis brothers, Peter and David, from September 2010, when they played in Cork shortly after that year's Electric Picnic Festival. It features...

...Stratocasters vs Gibson SG's, a village in County Durham called Noplace, Sunderland's shipbuilding past, The Beatles' Happiness is a warm gun, the predictability of pop song structures, Jeff Wayne's War of the Worlds, teenage pub gigs, singing like Joe Cocker, and more...

My other notes at the time as follows -

It was a pleasure to meet a band so relaxed and willing to chat in leisurely fashion without an eye on the clock (the result, maybe, of having spent a spare day in Cork, a few days after their Electric Picnic Festival appearance). After the interview, I accompanied the brothers, with bass player Ian, around the corner to Fast Al's for superior pizza slices, eaten al fresco on Winthrop St (where several passers-by on their way into the gig approached to say hello to the band), whereupon the conversation turned to the Ireland and England football teams' European Championship qualification hopes, the merits (many) of the Hi-B Bar and the ubiquitous presence of pre-programmed radio.

As for the gig in Cyprus Avenue, this is the tightest band I've heard in a long time. But they were still loose, if you know what I mean, playing off each other, as the stop-start arrangements demand, and locking down (I think the term is) some wonderful grooves. It's the first time I've ever seen a guitarist and drummer swapping duties (the musical equivalent of the brothers finishing each others' sentences?), but they didn't miss a beat in the process. It was interesting to think back to Peter talking in the interview about his desire to play more guitar on this album (Measure); I thought that very appealing air of unpretentious northern Englishness was most evident when he was at the piano. The tunes (of which there are many great ones on the current album alone - Measure, Them that do nothing, Something familiar etc.) shone through in all their whimsical, bittersweet glory. They also rocked the joint sideways. 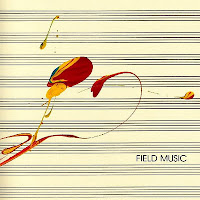 That last album was easily one of the best things released in the first decade of the 21st century. This is what I wrote at the time.

Field Music – Field Music (Measure) (Memphis Industries)
This was released in March, but it's so good it's worth waiting for. 20 insinuatingly catchy, slightly surreal pop songs from the Brewis brothers, which manage being angular without sacrificing the tune. The spectre of XTC and Abbey Road-era Beatles is wrapped warmly around the songs (even Led Zeppelin in places - in fact, a lot of the album sounds like one man's love affair with a Gibson SG). The songwriting is intimate, domestic, concerned with work and relationships, always wryly optimistic. Perfectly pitched, mostly guitar-based arrangements (sprinkling of piano and strings here and there), including some great backing vocal innovations (I particularly love the oooh's in Each time is a new time). There are hooks all over the shop. Rubber soul doesn't get any better than this.

Let's relive some of its greatness, while we get psyched up for the new album.