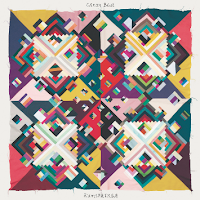 You might remember a couple of weeks ago, the Efterklang gig with Daniel Bjarnason & Their Messing Orchestra in Cork was mentioned in these pages. Playing guitar on stage that night was American Daniel James, whose own album Rumspringa comes out at the end of the month under his stage name Canon Blue, through Efterklang's label Rumraket and Temporary Residence in the U.S.. James has been a touring member of Efterklang for the last couple of years and the album was recorded with them at their Copenhagen studio. Those other great Efterklang acolytes, Amiina, are apparently heavily involved throughout the album, which is great news. The first song from the album to see the light of day is below - follow the link below for a free download. If you're looking for a genre tag, let's go with orchestral pop. Although I have to say there are intriguing hints of Ennio Morricone in the choral work in this tune, as well as some unexpected traces of Eastern music floating in the background. It's bright and breezy but comes with added layers. Makes me want to hear the whole album, basically.

*For anyone in the U.S./Canada, Canon Blue are about to embark on an extensive 30-date tour, largely with The Boxer Rebellion - details here
Amiina Canon Blue Daniel James Efterklang Rumraket Temporary Residence