Roll the Dice on The Leaf Label - new album upcoming 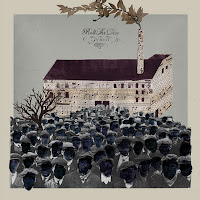 The Leaf Label, that wonderful English independent (Efterklang, Oh No Ono, Murcof, Colleen etc.), announced a new signing earlier in the year, the Stockholm duo Roll the Dice, who are Malcolm Pardon and Peder Mannerfelt. Their first album for Leaf, second in all, comes out next month, it's called In dust. As a teaser/trailer for the album, there's a fascinating piece of film made by Frode Fjerdingstad. You can watch below - it's like some futuristic Sergio Leone western, shot by Nic Roeg, with a script by Cormac McCarthy and a foreboding soundtrack of electronic rumbles and whines.

So far, I've just heard a couple of bits and pieces from the album, including its last track See you Monday. That's a fantastic blend of Steve Reich-like piano repetitions and Kratfwerk-style kosmische, with a great fuzzy, pulsing synth heartbeat. You'll have to wait another while to hear it, but the band have put together an intriguing mixtape for FACT magazine, with material as diverse as Brian Eno, Glenn Branca, Raymond Scott, Daphne Oram, Tom Waits, Sébastian Tellier and Experimental Audio Research, among others. Check it out on this link.

To whet the appetite for the new album even more, here's another piece of film, set to a live recording the band made in Gothenberg last year, a track originally featured on their debut album.

It's worth mentioning also that Mannerfelt has been a member of Fever Ray and Pardon has a background in tv and film composition. That all makes a certain amount of sense when you hear the music.