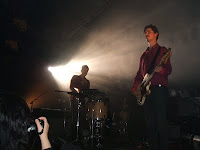 So Efterklang came to town over the weekend (that's Rasmus and Casper on stage in the photo above). They brought some friends with them - about 17 in fact. Here's the crowd from a photo taken before their February performance at the CrossLinx Festival in Holland.

I found that photo on Morris Kliphuis' blog, http://morriskliphuis.blogspot.com/2011/07/efterklang-in-cork.html, who was part of The Messing Saxes onstage, I believe. That's Daniel Bjarnason in front, centre of that pic. He's the one who made these arrangements for the Efterklang songs, and also played a Rhodes (I think it was) onstage. Aswell as Casper, Rasmus, Mads and Thomas, the core members of the band, there was also Daniel James (aka Canon Blue) on guitar, Peter Broderick on marimba, violin, vocals, steel drum (has he been listening to Wildbirds & Peacedrums I wonder?) and very possibly some other stuff, Heather Woods Broderick on keys, vocals and flute and a second marimba player who joined for a few songs. Most importantly for me, there was also both a four-piece brass section and a four-piece sax section. I didn't take any video on the night and I haven't been able to locate any footage of the gig posted, so here's some of the preview material again that I posted last week (from the Efterklang website).

And here's a fan's eye view from the Cross Linx Festival in Rotterdam earlier in the year.

Pretty great, eh? And that's how the Savoy gig was too. Offbeat but catchy, downright groovy but cerebral at the same time. Efterklang's music works on several levels but it was a real joy to hear the horns give everything an extra gear (those were Casper's words when I spoke to him the day before, while the band were setting up in the venue - I'll be posting that interview in full next month). And as we've said here before, there's no day that can't be improved with a bit of brass and reed. It's just one of the laws of nature. 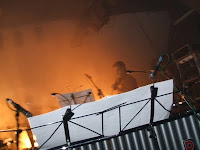 Although I'm a huge fan of the band, I wasn't taken as much with their last album, Magic chairs on 4AD. The songs and arrangements were great, but the production was a little polished for my taste. But live, those misgivings go out the window, especially when the songs are put through the aforementioned extra gears. The likes of Morning drift, I was beating drums and Alike were shimmering, honking underground pop classics. I think Alike was my own favourite moment of the night, partly because I watched Vincent Moon's An island again last week and I found the scene where the band (and friends) perform the song quietly moving and joyous, all at the same time (not to mention funny - what other music film features a brushing-the-floor percussion section and popping-the-balloons cymbal crashes). Hearing the song up close in all its brass and reed glory was one of my musical highlights of this, or any, year. The definition of glorious and uplifting pop music, really. And if the reaction of the rest of the crowd in the Savoy was anything to go by - by the time the band finished the gig with a walking circuit of the dancefloor, complete with percussion and honking horns as they went, the people of Cork were chanting, clapping and grinning like loons - I wasn't the only one uplifted.

*Unfortunately, I didn't make it into the Savoy in time to catch much of the supporting bill (I blame the quality of the Murphy's in the Hi-B). We did hear a few minutes of the Messing Saxes, who were being given the adulation of rock stars when we arrived. What's not to love about nothing but saxophones playing rhythm, melody and harmony. We missed Canon Blue and Heather Woods Broderick. I'd love to hear if anyone did see them. (The new Canon Blue single is on my list for this month, more anon.)