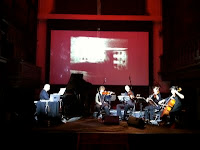 And so to another great gig (maybe concert is a better word, maybe not) to end a great weekend of music (go here if you haven't heard about the context for this, The Reich Effect Festival). The Icelandic composer Johann Johannsson came to Triskel Christchurch last Sunday with the Iskra String Quartet (that's a photo - I assume from the soundcheck, seeing as the place is empty - taken from the Iskra blog). I went along as a novice, in terms of familiarity with the man's music - but then going with a blank slate can be an interesting way to approach a performance.

This venue opened last April and so has only hosted a handful of musical events to date. I'd hazard a guess that this is the first time that a combination of volcanic rumblings and brushed strings had been heard in the place. That number resolved into something like aircraft noise, a very un-concert hall type of sound. But this performance was unconventional in several ways, by concert hall standards. The beautiful, swelling, repeating piano patterns were backed with grainy, scratchy - bordering on distressed - visual projections behind the performers*. These consisted of slowed-down traffic footage, construction sites, a man cutting through ice. At times, the music acted like a stately soundtrack to some forgotten world, with hints of Michael Nyman at his most sombre and austere.

Later, a filtered, robotic vocal reciting in Latin and melancholy strings came together to make an incredible emotional pull. Here's the tune, Odi et amo, performed at The Melkweg in Amsterdam a couple of years back.

Interesting too how the audience came to grips with the show, staying quiet through the first few numbers as the musicians played on, as is the classical etiquette, but eventually letting rip with loud applause and cheering, forcing the artists to pause and acknowledge, pop style. Here's another gorgeous, elegaic instrumental from the show.

It's from Johannsson's first solo album, Englaborn, which came out in 2002 on 4AD, and was originally composed as the music for an Icelandic play of the same name, as Johannsson explains on his own website:

"The play is extremely violent and disturbing and basically when faced with the script I decided to work against it as much as possible and just try to write the most beautiful music I could. That approach seems to have worked, at any rate, the music got really good reviews, the leading drama critic calling it "the most beautiful I've heard in Icelandic theatre." I must say I've never had such a strong reaction to anything I've done before; strangers have actually stopped me in the street and hugged me because of it...! Bizarre.. It is gratifying though, because it’s probably the most personal thing I've done. This stuff is very very close to me."

It's certainly beautiful. Overall, it was an intriguing night of music that you might call post- or neo-classical, but wasn't quite comfortable with the "classical" tag at the same time.

*One of my companions was particularly disenchanted with the projections, finding them pointless and pretentious, along with the show in general in fact. Some of the footage did seem random, but I think she was in a minority on the night.

**Johannsson's latest album, The Miners' Hymns, music from which did not feature in this show, is out now on Fat Cat. It's a soundtrack to a film by Bill Morrison. You'll find plenty of details here

and over at Songs to Learn and Sing.

Here's a small sample of the music and visuals from that project - it also sounds brilliant.