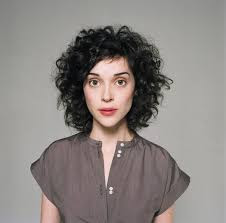 Another day, another strange and beautiful chapter to the story of Annie Clark of Dallas, Texas, that is St Vincent. The first official video from her new album Strange mercy just surfaced, directed by Terri Timely. That's actually two people, who I've just learned have made music videos for Joanna Newsom, Darwin Deez and The Little Ones, as well as working with St Vincent a few times before. This particular piece features lots of stately tracking shots and buttoned-up performances, which are spookily at odds with the film's themes of abduction, imprisonment and torture. An average day for St Vincent, says you. Meanwhile, the tune has more of her trademark distorted guitar arpeggios. One memorable shot in the video has her playing a guitar solo in the boot of a car with a sack over her head. Baroque pop is right.

There are some nice notes here by Annie Clark about the video shoot, courtesy of The Huffington Post.

It was an absolute pleasure working with the Terri Timely directing team for the third consecutive video. The cast and crew and I shot three gruelling days in a row at locations both north and south of San Francisco. Everyone kept such a generous attitude for the duration even as the coffee started to wear off, the California summer winter came through, and the delirium set in.

The first day we shot all the grave scenes at Ian and Corey's studio. Set design did a brilliant job building a "grave." This consisted of three 20-foot tall flats covered in cow manure, ammonia, dirt, sand, tree limbs, which I was lowered into via forklift. I think I still have some of this grave dirt in my shoes. At nightfall, we went to shoot at a local gas station -- one of those places that maybe used to be an Exxon or Sinclair but is now locally owned -- which is probably the only reason we got access to shoot there well into the early morning hours.

Cassidy, the delightfully mordant little girl featured in the video, was cracking me up between takes, wheeling herself around in the prop wheelchair and showing me how to use her Playstation handheld to take pictures of people and then comically distort their faces. Very intelligent, very special child. Bjorn, the perfectly-acted dad/bereaved husband, instructed me on how to make the abduction scene more believable by not anticipating that he was about to throw a sack over my head. Luckily, it didn't take much method acting to honestly react to, well, having a sack thrown violently over my head and my body thrown into the trunk of a car.

The next day, we started at the Mare Island location. Mare Island is a mostly abandoned naval base just north of Oakland. The mansion where we shot was one in a row of six or seven identical officer's mansions, each in various stages of upkeep, ranging from eerily pristine to complete disarray. The one where we shot was somewhere in the middle. Set design was so meticulous that it was actually impossible to tell what was brought in for the video and what was a haunted holdover from the 1960s when the mansion was used to entertain esteemed guests of the naval brass. These two days are a bit of a blur, but I know in the midst of things I got dunked in water by a 10-year-old child, watched an amateur pyrotechnics demonstration, had some great laughs with the great girls working in wardrobe, learned how to ballroom dance (sort of), and felt incredibly grateful to be working with such talented and sweet people. The rest of it... well, I'll just have to watch the video to remember...

Nice phrase that, "delightfully mordant". It could almost be a description of her own music.