Cairns is a lazy, small town full of boats and cane fields. It is also unbearably hot. An old army officer once said to me that the heat took away his pride. He then sucked loudly on the straw in his gin and headed out to the first hole. I was his caddy so I followed him.

What an intriguing scene-set that is (and it actually has echoes in a few other Grant McLennan Go-Betweens songs, which we'll come back to later). Once I got the cassette home, I discovered that the song also contained a literal reference to this note, in one of the most outrageously audacious lyrics in the history of pop music -

"The white moon appears like a hole in the sky, the mangroves grow quiet
In La Brisa de la Palma a teenage Rasputin takes the sting from a gin"

According to the sleevenotes, that song was written in Immigration, on the way back into the UK from the US and Grant's sister reckoned Marianne Faithfull should sing it. Priceless.

Robert Forster has many memorable notes on the sleeve, including this for Man o' sand to girl o' sea, also on Springhill Fair, their third album from 1984 -

In rock 'n roll terms The Go-Betweens always take the checkered flag. This road-running slice of beauty and mayhem - I can distinctly remember turning to the band and saying "let's burn this land". And by Jesus we did.

Hilarious and it makes me love it even more. That and Robert's "guitar" injunction just before the solo.

One of my favourite Go-Betweens albums is Tallulah (1987), which has four tracks on this collection (that album only comes about third usually in most critics' or fans' assessments of the band, which always surprises me, normally behind Before Hollywood and Liberty Belle and the Black Diamond Express). Including The house Jack Kerouac built, a wonderfully acidic little song with Amanda Brown's stabbing violins, which suited my mood very well when I first heard it in 1991 ("keep me away from her..."). Watch out for the hilarious "Fiddler on the roof" intro to this live version.

Grant's The wrong road is another highlight of the collection, with its majestic string arrangements and cello by one Audrey Riley (who later adorned Moloko records and played live with Cathal Coughlan).

It originally appeared on Liberty Belle and the Black Diamond Express (1986), one of their more downbeat, melancholy albums (Tracey Thorn of Everything but the Girl also notably sings backing vocals on Head full of steam and Apology accepted on this album). Here's the cassette cover which Robert Forster signed for me in 1996 in The Village in Dublin, when he was on his solo tour supporting the Warm nights album. I always dug Lindy Morrison's cowboy hat on that cover. I still can't make out what he wrote though. 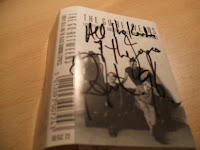 Liberty Belle is downbeat apart from the opening song Spring rain, of course, which features one of the best guitar breaks ever in a pop song. I also enjoy Robert Forster's black and white striped tunic in the video - watch out for the lovely gatefold vinyl version of the 1978-1990 sleeve at the beginning.

Cattle and cane is generally regarded as the best song the band ever recorded, from Before Hollywood (1983), which is usually nominated as their best album. Here's a jerkier, more post-punk version than on the album, which possibly gives a clue as to why the likes of The Wedding Present, among others, covered it. (By the way, is that a samurai film playing in the background?! If anyone knows what it is, give me a shout.)

That song is about, or at least heavy with the memory of, Grant McLennan's father. In the sleevenotes, Grant writes -

The song came easily, was recorded quickly and still haunts me.

He's not alone in that, I'm sure. Interesting that he doesn't mention his father on that note. Later though, the note for Dusty in here reads, in full:

This song is about my father who died when I was four.

I always read that as a kind of terse "don't ask me any more about the subject". As well as sad and nostalgic, which words could be applied to many Grant McLennan songs. Incidentally, Wallace Wylie has a great assessment of Before Hollywood here.

Although I can understand why people pick this as their favourite Go-Betweens album, it so happens that I heard Tallulah first (another Beggars Banquet cassette special for a fiver in Comet Records) and bonded strongly with it straightaway - it contains about four or five classic songs. In that article above though, there is a very good point about Lindy Morrison's drumming on Before Hollywood.

"Bringing a tension and control to the entire proceedings, Morrison’s drumming provided the songs with the necessary tautness that allowed the bass and guitar to quarrel and snap."

She is a little bit the forgotten limb of the band. And there's no better example of that description on Before Hollywood than the brilliant Two steps step out, with the most direct and uncompromising of backbeats. (By the way, if anyone tries to interest you again in The Proclaimers' 500 miles, tell them where to go, and play them this.)

That song isn't on the 1978-1990 collection. But the first song on it, Karen, quickly became my favourite Go-Betweens song.

I think it was the bare-bones, garagey guitar and the fact that they could make so much out of so little - very punk rock, really. And lyrics like these helped too -

Pure class. Show me a band today who'd have the balls to write a love song to a librarian and not turn it into a novelty gimmick. It was originally the B-side of their first single Lee Remick, released on their own Able Label. 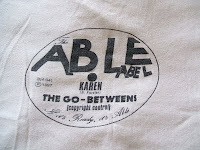 It also appeared on their 1999 release, 78 til 79: The lost album, a collection of their early recordings, most of which were unreleased at the time. Here's a nice piece by Stewart Lee, another huge fan of the band, from 1999.

It's just over five years now since Grant McLennan's death. There are annual commemorative events held all over the world, like this one in London earlier this year. Robert Forster still plays and releases music and tours occasionally, as well as writing some fine music journalism. Like this piece about fellow Australian Sarah Blasko's last album. Amanda Brown composes music for film, television and theatre, of which more detail here. Lindy Morrison is involved in community music and artists' rights in Australia, as she describes in this interview. And Robert Vickers (I didn't mention him above but he was responsible for the great circling bassline in Bye bye pride and played on three albums in all) is a music publicist in New York. And there's now a bridge named after the band in their hometown of Brisbane. Some funny coverage of the opening ceremony here.

*By the way, the solo albums of Grant and Robert are all worth checking out too. In Grant's case, I would start with Watershed on Beggars Banquet from 1991 (when he was calling himself G.W.), which has some beautiful AM radio-style pop songs on it. I got my copy on cassette for a fiver in Comet Records.

**Here's what I think is the best appreciation of the man written at the time of Grant's death, by Robert Christgau in The Village Voice.